Back to articles Celebrating Maple Syrup & Worrying About Its Future

The festivals which run for about 6 weeks from the beginning of March until the Easter Weekend, are an annual celebration of Canada's true eco-friedly liquid gold. Canada's international reputation has been taking a hit in the last decade or so as we are becoming known as an exporter of natural resources such as oilsands, asbestos and other materials that are ultimately harmful to the environment and to humans.

This branding, while warranted is unfortunate since we have also been exporters of other natural resources and products such as Maple Syrup -- the all-natural liquid gold that Canada produces approximately 80 - 85% of the entire worlds production of. What's even more ironic is that due to climate change - a man-made dilemma caused primarily due to the increased use of fossil fuels such as our oilsands, the annual production yields of maple syrup have been on a somewhat steady decline.

The process of making maple syrup is rather simple. As sap begins to flow within the trunks of maple trees, due to a process of nightly freezing and day time thawing, the trunks are tapped to extract the sap. The sap from the tree is mostly water, but through the process of boiling down the water, the concentration of sugar increases until eventually you get to a point where what remains is what we have been putting on pancakes, waffles and oatmeal for centuries.

It takes 40 buckets of sap to produce just one bucket of maple syrup. At the Maple Syrup festival visitors are shown demonstrations of how trees were tapped and sap boiled down using traditional methods. At the same time they can see how modern production methods have eliminated the need to use pails as well as how modern boilers have replaced open pit fires. 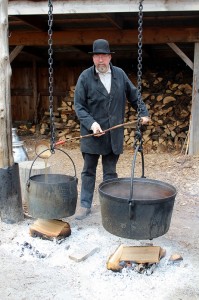 Beyond the pure decadence that Maple Syrup offers, it's also big business. Canada annually produces somewhere around 26 Million litres of the stuff, with most of that being produced in Quebec. This nets an economic boost of about $150 Million annually. Awareness has also been increasingly growing as to the health benefits of maple syrup, as it contains notable amounts of calcium, iron, potassium and zinc. Maple Syrup has also been shown to have antioxidant properties as well.

Despite all that is good about maple syrup, there is much about it's future that leaves both maple syrup producers and environmentalists with a lot to worry about. In some respects what we are seeing with regards to the struggles to produce maple syrup in parts of the US especially, is akin to a Canary in the coal mines where climate change is concerned.

The sap of sugar maples, which is the one and only ingredient of pure maple syrup can only be harvested during a period of weather where freezing temperatures at night are followed by thawing temperatures during the day. Traditionally this time period lasts about 4 to 8 weeks and takes place around the end of winter and the beginning of spring. However due to the effects of climate change we are seeing both a shift in harvesting periods as well as a decline in production overall. In fact some areas of the US that have traditionally been maple syrup producing zones can no longer do so given that the temperature fluxuations needed simply don't take place. 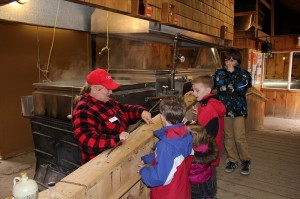 As the geographic areas capable of producing maple syrup keep shrinking northward, the risk of permanent diminishing our supply is real. There is a hard cap to northward expansion of the sugarbush given that at a certain point trees will no longer grow. A concern for afficionados of maple syrup is that reduced supply will only drive prices higher and thus eventually making it a luxury product where only the wealthy can afford to purchase and enjoy.

At Bruce's Mill, the small production operation they have was greatly affected by the abnormally warm winter we just experienced. Yields from their sugarbush were down an astonishing 90% from the previous year. The economics of this were glaringly obvious when you visited the Sugar Shack retail outlet where locally produced Maple Syrup was selling for $28 per litre, which is about 30 - 40% higher than last year by my own estimation. While commercial producers have the ability to adjust their harvest cycles better than they do at Bruce's Mill, it's estimated that the harvesting time period has been reduced overall by about 10% over recent years, and this is a growing concern. 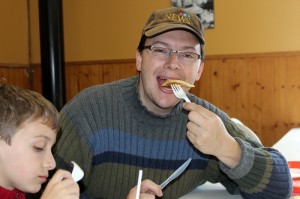 When it comes to making substantial changes to our lifestyle, its absolutely true that everyone has within them a motivator which is strong enough to get past the difficult aspects of change. While I wouldn't suggest that the struggles of the maple syrup industry alone would be one of those motivators, it may very well be something that when added up with other things, it brings people that much closer to finding the push they need.

As a proud Canadian, a passionate lover of all things maple and an EnviroDad, I know that for me saving our national iconic export - not to mention my favourite all natural sweetener is something definitely worth fighting for!

About Eric Novak
Eric Novak is a father of 4 who also thinks that environmental stewardship is a requisite of parenting. He's not a professional Dad nor is he an environmental scientist, but he's someone who gives a damn and is trying to make the right decisions as he lives his life as a father, environmentalist and business owner. Eric and his wife Karen have 4 children and reside in Ajax, Ontario.
www.envirodad.com