Back to articles EnviroDad.com Presents Bobs & Lolo in Concert!

Canada's west coast is either home to or the birthplace of many of this countries best musical acts. From Bryan Adams, to Hedley, to Sara MacLaughlan and even Bobs & Lolo. Yes, that's right, I said Bobs & Lolo.


Now if you are scratching your head and saying 'Bobs & Who'?, then you likely don't have kids who live a TreehouseTV kind of exsitence. But if you do--then you know that this Vancouver based children's musical duo, are a pretty big deal to their target audience.

As a father of 4, I've been hooked on Bobs & Lolo for several years now. While my eldest 3 have outgrown this stage, my 3 year old daughter is a bonna fide groupie! And for an Enviro Dad like me, what's even more appealing about them is that many of their songs work to educate and enlighten kids about nature, the environment and sustainability. I've written about them on this site in the past and even interviewed them on their last tour around Ontario.

It should come as no surprise then, that when I learned of their plans to visit Ontario again in early 2013 to put on a series of concerts, I reached out and said 'Looking for someone to work with? Pick me! Pick me!' (It wasn't exactly like that--but close enough)

So with that said, I am proud to announce to EnviroDad.com readers in the Greater Toronto Area that on Monday, February 18th (Family Day) EnviroDad.com is proud to present Bobs & Lolo and their Nature Rocks Tour!

The concert takes place in Whitby, ON (15 - 20 minutes east of Toronto) at Class Act Dinner Theatre. Show time is 2:00PM. A second show may be added if ticket sales are strong enough. Given this is the closest show to Toronto on this tour (London & Guelph being other stops), my hope is that we will easily sell out the first show and add a second show earlier the same day.

Tickets are only $15 each. Cash ticket sales are available at Class Act Dinner Theatre as well as at Once Upon a Child, Ajax. For those not living in Durham but close enough to attend, we also have ONLINE TICKET SALES AVAILABLE! 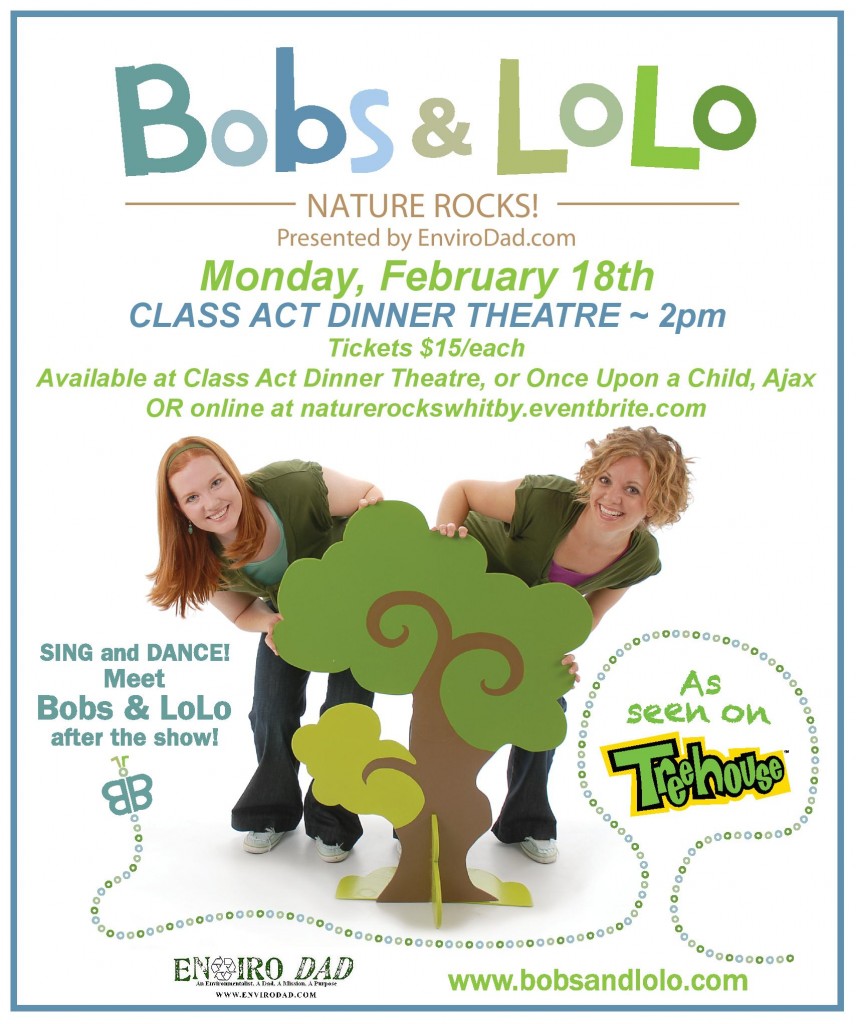